An Apocalypse of Stupidity: One Possible Future

They will tell you that the world will end by nuclear holocaust, or by climate catastrophe. Or maybe they'll say the world will choke to death in its own pollution, or starve for lack of enough resources to feed an overpopulated planet.

A Slow Apocalypse of Stupidity: Fourmilab

But more likely to seal the fate of humanity, is the slow and steady loss of human problem-solving ability. 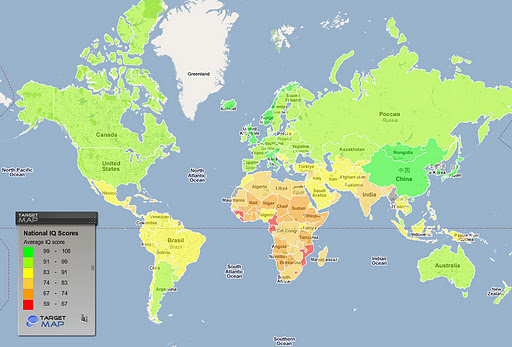 Over tens of thousands of years, separate human breeding populations evolved to meet divergent challenges in their environments (Kanazawa PDF). Some environments presented greater challenges to be solved, for the sake of survival. The farther from the equator a group migrated, the greater the seasonal challenges of survival. As greater intelligence evolved, humans devised sophisticated societies and technologies to shield them from the environment.

But in the course of becoming more intelligent, they created micro-environments of culture, with differential rates of divergent intellectual revolution.

Not all populations reproduced at the same rates. More affluent, more intelligent, and better educated women chose to reproduce at lower levels -- or not at all -- compared to women of lower educational attainment (on average). Higher birthrates among less intelligent populations began to affect overall average IQ levels. 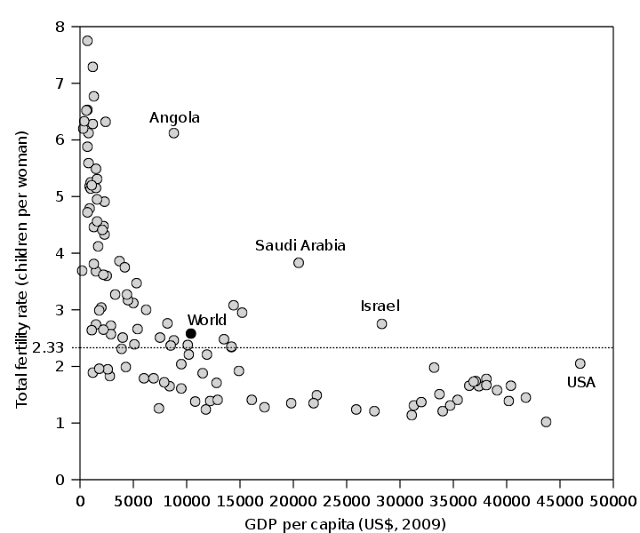 And since IQ is strongly correlated with level of economic achievement (Gottfredson PDF), societies with lower average IQ levels tended to be the most impoverished societies. 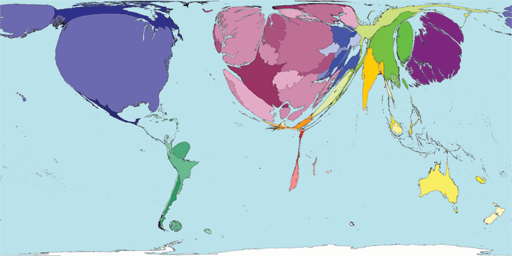 Imagine a World Without Europe or the Anglosphere
Besides economic achievement, scientific and technological achievement tends to accompany high average IQ. Low IQ nations in the map above tend to be very tiny, unless they are lucky enough to have a high IQ smart fraction.


Finally, crime and corruption tend to correlate with low average IQ levels. So that even low IQ populations lucky enough to have a smart fraction, will be less able to efficiently utilise that lucky bit of human capital. 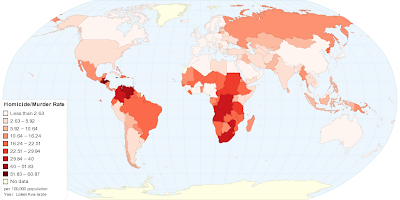 There is no reason to expect the differential birthrates between the different strata of IQ and education, to change. The global decline in average IQ seen in the graph above, is likely to continue unless something significant happens to change the trend.

Many people are aware of the trend, but no one has a good answer for it. Good people may well think the answer may be found thru better education:

While the smart people know they must fight the tyrannical government or run away to another country, the not so smart grow in numbers. In our current state, we will not be able to hold government accountable and put a stop to the tyranny. We must overcome the stupid somehow. We must find a method to show them the folly of their ways. We must “educate” them on what their responsibilities are in society and we must show them how to exercise those responsibilities properly. _LibertarianViewpoint

But no one really believes that such "education" can be both effective and humane. And since we voluntarily limit ourselves to humane methods, we must admit that we will have to look for other solutions.

Here is an analogy: Realistic energy analysts generally accept that humans should use unconventional oil, gas, and liquids as temporary "bridge" fuels to better forms of power and energy such as advanced nuclear power. In other words, we must make good use of the next few decades to develop long term energy solutions that will last for many thousands of years.

In the same way, realistic students of the human future understand that brighter people must make very good use of the next few decades to develop bridge technologies which will see us past the approaching dysgenic bottleneck.

First, we must take the trouble to understand that the problem is real.

We must understand how differences in average intelligence between population groups influence quality of life issues such as crime, affluence, social trust, levels of corruption, etc. Such an understanding is likely to influence important life choices.

And we must be able to project current trends -- often contradictory trends -- into the near future. Then we must devise ways of best dealing with our conclusions for our own sake, and for the sake of our dependents.[left]

I try to stay to myself as much as possible, not liking most people, I tend to prefer the company of my dog to that of most people.

But I do need to go into town every now and then; I always end up shaking my head in disbelief at what I see and hear. Sometimes it seems as though, I am the only sane person surrounded by a world of morons and degenerates.

Over forty-seven million adults in this country are illiterate. A child who can read and does well in school will be labeled a nerd and ridiculed by others who are too lazy or stupid to learn basic reading and math skills.

It is “cool” to be dumb. And it seems like this trend is getting worse as time goes on.

When that civilization ceases to produce superiors it will collapse.

Our modern civilization was not the first. Many others came before us. After reaching a point of peak power and influence, they stagnated and perished into ruin. The basic cause of disaster was almost always from a decline or breakdown from within.

Any civilization depends upon the quality of its human supporters. Without a continued supply of intelligent and moral people to make a population no civilization can stand.

Before the advent of modern civilization, very few of the unfit could survive long enough to reproduce. Man lived in a state of nature; qualities of strength and intelligence were necessary for survival.

The weak and dumb soon fell by the wayside being weeded out by the process of natural selection. Nature eliminated the weak, while preserving and allowing the strong and intelligent to survive and breed freely, insuring a superior stock.

Primitive man relied upon muscle, both animal and human for his existence. Now oil supports life on earth. Everything sustaining our modern civilization relies upon oil. Oil has made life easy. It has allowed a surplus population of inferiors to thrive.

It has modified the process of natural selection and survival. We can now grow more food, produce more goods and extend the life span of the population and cater to the needs and welfare of the inferior.

Modern civilization has enabled many weak, stupid, and degenerate persons to live and have children, which in turn repeat the process, increasing the numbers of the inferior with each passing generation.

The inferior thrive and multiply while the superior decrease in number leaving every seceding generation worse off and dumber than before. How long will it be before we fall back to the lower levels of barbarism or even savagery?